SQL for ArcGIS® Pro provides breathtaking depth and clarity of insights into your data by automating difficult analytics within point-and-click dialogs and encapsulating Math God genius within powerful SQL functions. Use the power of SQL for ArcGIS Pro to reveal all secrets your data contains. For , fully paid, get the most powerful data science GIS ever created.

Doing data science or other serious work with spatial data? See the No SQL in Pro? page for why SQL for ArcGIS Pro's superb spatial SQL is a better choice than Esri's subset of SQL.

Right: SQL for ArcGIS Pro analytic templates in the Transform pane provide previews. The illustration shows a preview of a viewshed calculation for a 6000 meter distance from each of two observers, falling within the 6 km radius circles. The blue preview areas show regions visible in the terrain from either fo the observers. The preview is shown using a split screen, where the preview border has been dragged toward the middle to show part of the window with no preview. From the Viewsheds topic in the User Manual.

SQL for ArcGIS Pro runs dramatically faster than older GIS packages, often doing in minutes or even seconds what takes hours in AcGIS Pro or days in QGIS. The following extensive quotation from a user is a typical real life example. What took two and a half days in ArcPy and often required re-running now runs in only 15 minutes with no re-runs required.

"I just wanted to briefly acknowledge the dedication and hard work of the Manifold team. On an off I have been tinkering with a process to produce indicative coastal inundation layers for our hazards team using coastal LiDAR to produce a series of ‘flood’ extents at a series of inundation heights above mean sea level.

I started off with a script from one of our ArcMap users which processed the sample dataset (~19500 x 35500 px ) and produced the 30 inundation layers in ~60 hours. Once run, the DEM often required fixing and the process rerunning due to ‘leaks’ resulting from pixel generalisation along river embankments. Anyway, following the addition of the distance toolset, I ported the process [...] which immediately slashed the processing time to around 45 minutes.

Following on from this thread, the TileMaskRange function was introduced. I had earmarked this to try as an alternative in the inundation script and with the recent lockdown in NZ have finally found the time to incorporate it.

This function and some other simplifications available in recent builds have not only made the script much simpler, but also brought the total runtime using the same data and methodology as the ArcPy original down to a much more respectable 15 minutes (x240 speedup ). Thanks Manifold. Nice one.

The M9 toolset also allowed me to put together another project which identifies potential leaks before running the inundation tool so no more need to rerun the process." - Forum post

Mix data from any number of different data sources seamlessly. Blend and analyze in the same query data from Oracle, PostgreSQL, shapefiles, the Cloud, WMS servers, local storage and many more formats and data sources.

"There is not much GIS in what I am doing, however there is a great deal of relational database work. [...] Using [SQL for ArcGIS Pro], I can import tables from both Ms-Access and from Postgres and write queries that use data from both backends. I cannot do this in pgAdmin or in dBeaver [...] In [SQL for ArcGIS Pro], I can also drag data from gpkg files into postgres..." - Forum post

SQL for ArcGIS Pro effortlessly handles all data types you need for analysis, including sophisticated spatial analysis: Vector data and complex, multi-channel, multi-type rasters, curvilinear geometry, Z values and any pixel type, with all the infrastructure like specialized indexes and coordinate system functions you need for fast and accurate analytics. 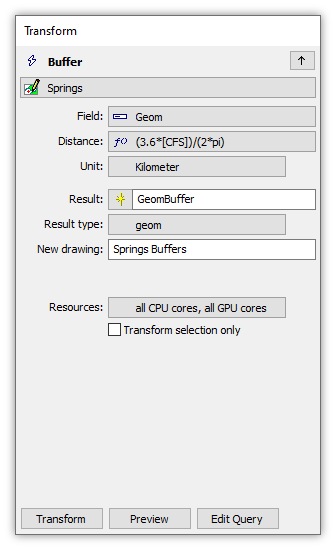 Right: The Transform pane provides point and click templates with a wide variety of options. The illustration shows using an SQL expression based on the CFS field for the radius of a buffer.

SQL for ArcGIS Pro's sophisticated parallelized spatial operators, like topology and spatial overlays, work with mixed objects, pathological geometry and do not require special data cleaning or simplification before use.

Scripting in Your Language 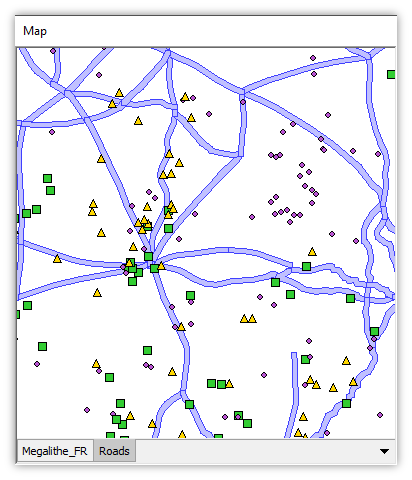 SQL for ArcGIS Pro supports scripting in ten popular scripting languages, providing "always on" scripting in many languages. Script a custom function and call it from SQL or call an SQL parallel function from a script.

On the Fly Formatting

Extensive, on-the-fly styling of vector data and rasters without changing data, even readonly data, with recombination of multi-channel data, ranges within channels, palettes, hill shading and other features.

See what an operator does before you commit the change. Visual previews throughout SQL for ArcGIS Pro - in tables, drawings, images and maps - prevent errors and wasted workflow. Images at right show how a point and click Buffers template is previewed in preview color in the map.

Our Place or Yours? 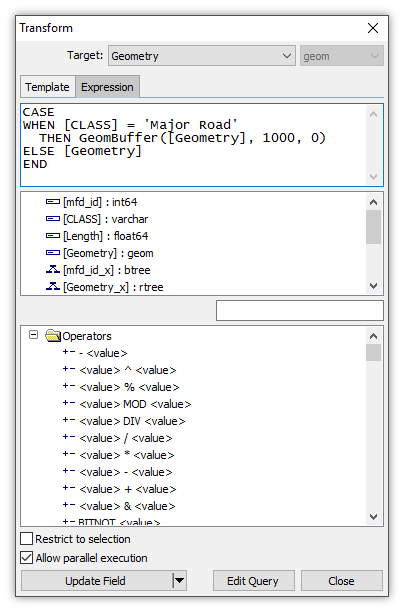 Analysis becomes easier when SQL for ArcGIS Pro does the hard work for you. SQL for ArcGIS Pro provides a seamless range of capabilities starting with point-and-click dialogs that provide access to hundreds of functions in database manipulation of text, numeric and other types, mathematics, spatial functions, raster analytics and many more. Templates automatically keep track of spatial infrastructure such as coordinate systems.

SQL for ArcGIS Pro's point and click functions also automatically launch parallelized operations that take advantge of all the CPU cores you have and will dispatch massively parallel computations to thousands of GPU cores if installed. If no GPU is installed, the computation automatically executes as parallel tasks on multiple CPU cores.

Even better, if we like we can combine the point and click infrastructure of templates with an expression in SQL to get the convenience of point and click support plus the power of customization using expressions. 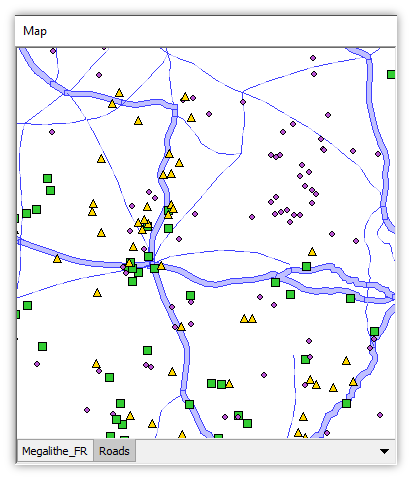 At right we clicked the Expression tab and dropped an expression in that creates buffers just for roads that are classed as Major roads. That too gets a live the moment we write the expression.

Want to see how a point-and-click template works? Click the Edit Query button and SQL for ArcGIS Pro launches a command window loaded with the SQL the template executes so you can see what functions are being used. It's a live query, so you can customize the SQL as you like or copy and paste into new queries.

If you prefer you can use a hybrid between point and click dialogs and full SQL by launching expressions within the point-and-click dialog. It's easy, it's fast and it's all blistering powerful by the massively parallel automation SQL for ArcGIS Pro automatically applies.

SQL for ArcGIS Pro automatically parallelizes and dispatches as many tasks as make sense to GPGPU, with automatic fallback to parallelized tasks dispatched to multiple CPU cores if a GPU is not available.

GPGPU acceleration works everywhere in SQL for ArcGIS Pro where worthwhile work arises: in the SELECT list, in WHERE, in EXECUTE, ...everywhere. For example, if you add to a table a computed field that combines multiple tiles together, that computed field will use GPGPU. If you do some tile math in a FUNCTION, that FUNCTION will use GPGPU as well.

You don't have to write something special or learn programming environments like CUDA. Use the same SQL you already know and SQL for ArcGIS Pro automatically parallelizes it to use GPGPU. If you don't use SQL but prefer point-and-click templates, those automatically use GPGPU as well.

When you write something like SELECT tilea + tileb ∗ 5 + tilec ∗ 8 FROM ..., the Radian engine takes the expression with three additions and two multiplications, generates GPGPU code for that function in a Just In Time, JIT manner and uploads the resulting code to GPGPU to execute the computations. 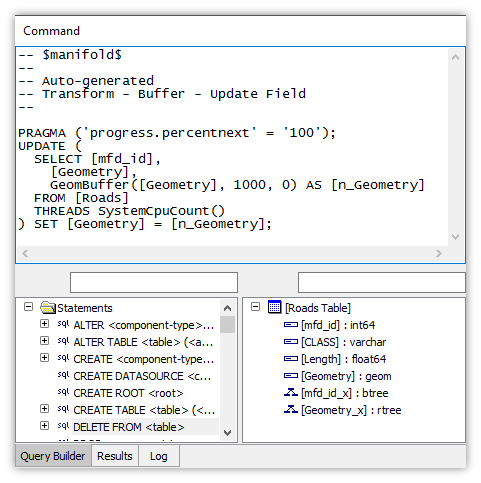 To save execution time and boost efficiency, JIT code generation for GPGPU functions is cache-friendly for the driver. Running the same query again, or even running different queries for which the GPGPU expressions are sufficiently similar to each other, will engage the compilation cache maintained by the driver

Other optimizations play along transparently. If a particular subexpression inside of an expression that runs on GPGPU is a constant in the context of that expression, it will only be evaluated once. If an expression that can run on GPGPU refers to data from multiple tables and has parts that only reference one of these tables, the join optimizer will split the GPGPU expression into pieces according to dependencies and will run these pieces separately and at different times, minimizing work. A SELECT with more than one thread will run multiple copies of GPGPU expressions simultaneously. There are many other similar optimizations automatically integrated with GPGPU utilization.

Some operations are so trivial in terms of computational requirements it makes no sense to dispatch them to GPGPU, the classic case being scalars (trivial) as opposed to tiles (more bulk). CASE expressions, conditionals and similar constructions or functions that operate on scalar values stay on the CPU while functions that operate on tile values generally go to GPGPU unless they use tiles in a trivial fashion, such as making a simple comparison. 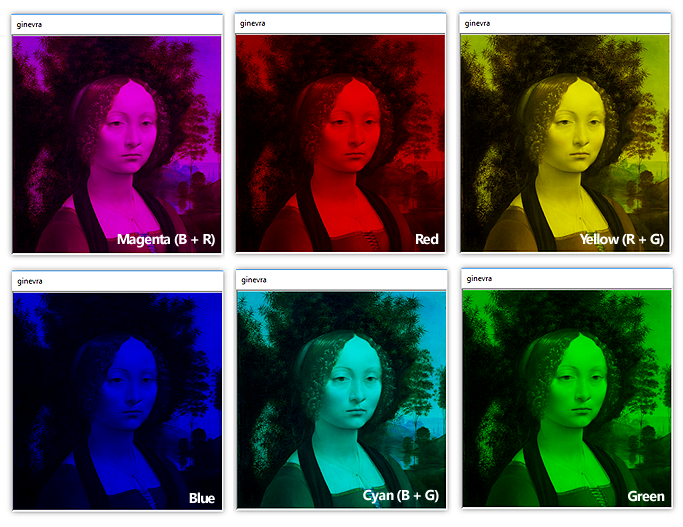 Above: The Style dialog for rasters enables instant combinations and recombinations of channel data, as seen above in an RGB image from this topic in the User Manual.

SQL for ArcGIS Pro handles multichannel raster data effortlessly, and allows recombination of channel data with fine control over ranges, autocontrast spreads, values, methods and many other controls. This allows altering the presentation and recombination of channels to provide immediate insights and to generate spectacular visualizations. 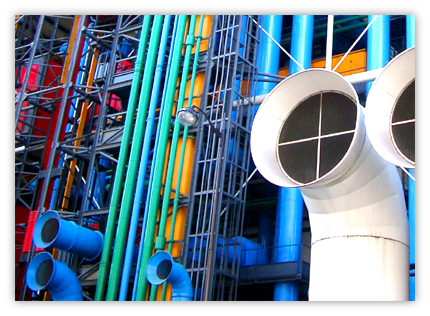 Nothing is Too Complicated

If your time is worth more than minimum wage and you're doing anything that requires your machine to think at a higher level than your coffee pot timer, you'll often pay back the cost of a SQL for ArcGIS Pro license the first time you use it for anything serious. It's that fast. Nothing else comes close. 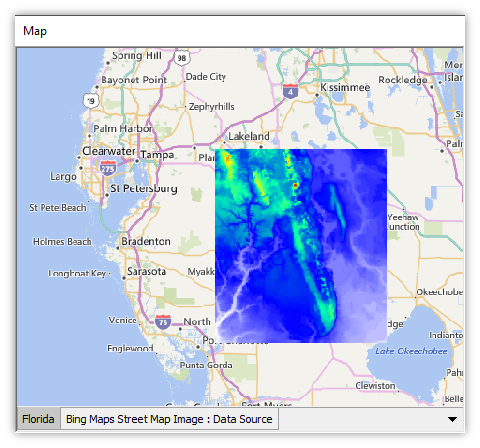